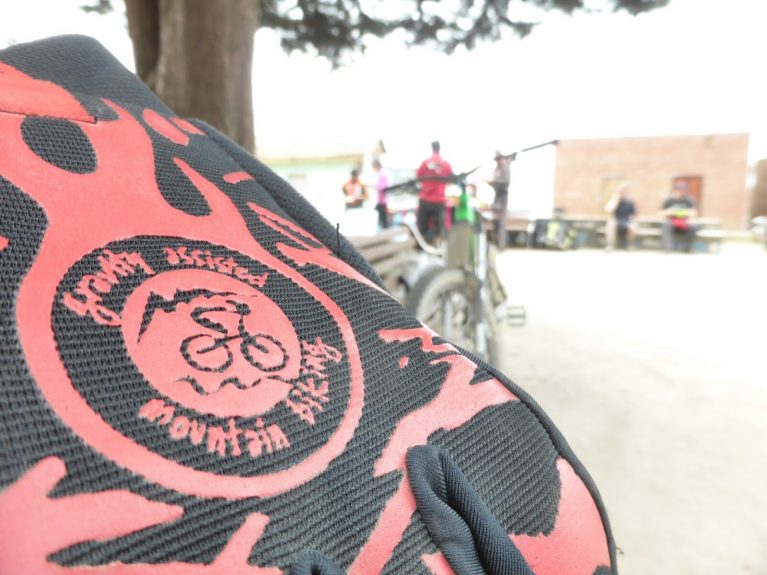 Gravity Assisted Bolivia
It’s not all about the Death Road!

Mountain biking in Bolivia has been taken to a new level by Gravity Assisted. The long established company deliver bucket loads of high adrenaline mountain biking adventures to thousands of backpackers year in and year out. Couple that with an attention to detail and safety that is second to none, it is clear to see why they are the number 1 when it comes to the famous ‘Death Road’. But mountain biking in Bolivia and visits to La Paz should not all be about the Death Road. Gravity Assisted Bolivia have constantly pushed the boundaries when it comes to developing new mountain biking in Bolivia. This includes branching out to new destinations and bringing bespoke and exciting adventures for all levels of riders to enjoy. This leads us on to how we came across the greatest adventure in South America.

Whilst relaxing and watching football in a hotel bar in Copacabana it did not take me long with the free Wifi to come across the Ride and River (R&R) option as an alternative adventure for mountain biking in Bolivia for G and I to take on. After a quick email exchange with Marcus (head of guides) at Gravity it was apparent that if we wanted to join the latest tour we would have to rendezvous with the group as they travelled from La Paz to Sorata. After a quick chat with Marcus on Skype it worked out easier for G and I to meet them in Sorata at the first nights accomodation which is the excellent and tranquill Alti Oasis. The first days riding starts about 30k from Sorata and is a mixture of rolling cross country and road to enable the riders to get used to the bikes before taking on days 2 and 3. With this in mind we were happy to miss the first day as Marcus convinced me very quickly that the rest of the tour would more than make up for it. 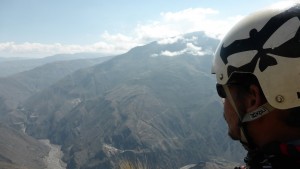 It’s not often you wake up in a little oasis of paradise before a mountain bike adventure. With cloud forest bird song almost drowning out the alarm it was time for a hearty Bolivian breakfast with the rest of the team. It certainly set us up before we clambered aboard the fully loaded Toyota Landcruiser for the 2 hour climb on rocky Scottish highland-esque tracks to 4700m. The guides for this trip were Moe, Alexandrau (Ali) and Herman; the driver. Moe an American-Boliviano is the go-to man and the perfect host. Alexandrau, the travelling Argentinian ´hobo´ who shreds his way around South America from one guiding gig to another. Between them they are fonts of Bolivian and biking knowledge. With Herman threading the Landcruiser up through the mountain passes out of Sorata to a soundtrack of Anglo-America punky/indie classics courtesy of Moe’ MP3, the 5 of us were more than content taking in the simply unbelievable steep canyon views.

As we climbed higher to the trail head, Ali fed us with local tales of enduro racing in these parts, along with Incan history and the importance of the Coca leaf to this area. This all combined together to fuel the excitement of 60 kilometers (kms) of big mountain biking for the mixed group! The ride was going to be 90% descent and the bikes from Gravity Assisted were perfect steeds for the job. Solid, reliable thorough-bred Kona Stinkys and my Transition Bottle-Rocket made up the rental stable! 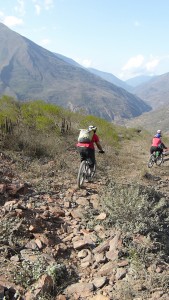 Being a XC (cross country) and AM (all mountain) man at 6ft 4″ (1.93m) there was more chance of having Condor eggs on toast for lunch then there being a bike big enough for me! This was not going to stop me enjoying the first ride on this trip. As the wining but melodic chords of Scar Tissue faded out we reached the top and the start of our day. We were surrounded by wild llamas, blue skies and silence as we all kitted up from the array of gear available from Gravity.

With the bikes given the final check, Graeme looking like a mini-Steve Peat about to rip up Mont St. Anne again and Ali taking lead we were off. Our aim was to reach a small village called Ananea for lunch. It was all downhill on swooping rocky double track, with small sections of fun singletrack to break up the high speed descent. Limitless free ride sweet spots for the adrenaline addicts. Or you can simply sit back and take in the Andean views of ice capped mountains and the serenity of the small isolated gold mines and Incan ruins.

Keeping pace with Ali was all I needed. There were plenty of rest stops to regroup and enjoy the views. For me and ´mini Peat´ it was all about the speed, flow and playground rolling out beneath our 2.6″ Kendas. With about an hour to lunch we passed through a tiny village to have one more water stop with Herman before blatting out a flat rolling section to Ananea where the famous Gravity guacamole was to be made by Moe and Ali. 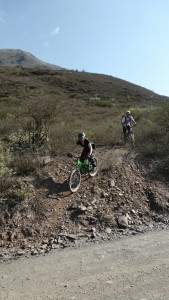 With the flat section finishing with a slight up hill to a spot perched over looking Ananea, the first few stopped to wait for others. Meanwhile the locals of Ananea were all congregated for some kind of get together with a brass band just 100 meters away. The now grassy, mossy mountain side a little like a Yorkshire dale, was catching my imagination. Knowing I had 10 minutes or so my singletrack nose was picking up a faint scent leading me around the locals who were sitting on a little plateau looking out across the vast valley and circled back to the team by the Benviendido sign.

With a lovely line taking in a broken Incan wall and a couple of perfectly placed bed rock slabs as berms, I had found 30 secs of bike park Wales here in Bolivia whilst I waited for mis amigos. A simple bit of trail that was easy to session for some big smiles before the guacamole man-wich! Despite creating my own fun I didnt realise the final descent into Ananea was going to bring about so many high fives in the tiny plaza on arrival. Just as my heart rate dropped back to normal after run 4, Ali had us weaving down a steep rocky shute before firing us down a trail that flowed between cobbled walls and village dwellings which was just like any one of a thousand classic British bridleways! Rolling crests, kickers, a little rock garden or two then a banked slab to filter us all into the tiny plaza was the perfect way to end the first 30km of high altitude mountain biking in Bolivia. Cue Herman and two picnic tables with more fresh food than the local market. Gravity certainly know how to put on a spread to keep the riders fuelled up.

Via pre-arrangement a local lady had brought down some fresh soup, coffee and Mate tea to add to the ample buffet. Our friends were less experienced bikers and as lunch was being prepared I passed on some pearls of wisdom regarding one finger braking, the attack position and general bike handling. With the Enduras bursting at the seams and Ali teasing us with dessert being served up as another 30km descent littered with longer sections of mule trodden ancient trails to break up the flat out double track everyone was drooling with excitement at the prospect. A quick adios to Herman and the locals and we set off like a pack of dogs pedaling hard with a brass band soundtrack out past the colonial church with the vista of cloud forest over our left side.

Ali throws on the anchors and spots our first short cut on a cacti laden trail. As we regroup Aline, Claudio and Aninia (the other members of our group) all rolled up with big smiles. Buzzing with renewed enthusiasm they all thanked me for the half time team talk. It was clear shredding all over South America in Enduro races gave Ali the perfect poise and flow as he led us down. I could not resist hanging off his back wheel as we rattled down the switchbacks and loose rocky trench. Following someone who knows the trail so well always brings a great flow and confidence. Camera out it was time to try and catch the singletrack newbies in action before the trail spat them out with even bigger smiles. Its as though the Incas knew that in 5 centuries their pilgrimage and trade routes would be used for gringo joy on two wheels. Gullies, ledgey drop-offs, sweeping lines between brush are all awesome foresight. 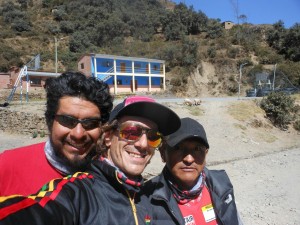 Pretty much the next 3 hours we descended hard and fast to the river basin with the last trail lasting around 10 minutes. Claudio showing the greatest improvement as he was giving me and G some serious heat up front. Lining up near a mining washing station we gather for the customary selfie looking like welsh miners before loading the bikes for the hours trudge to our overnight lodgings at Consata. What an introduction to mountain biking in Bolivia that was.

Humid but friendly we soon get settled into our modest digs. Kids flocked around to talk to us as Moe and Ali knock up a mouth watering pasta dish. Obsessed with Aninia’s blonde hair, my height and our general appearance the locals provided a warm and friendly welcome. This trip promises the real Bolivia and it delivers. Straw beds, cold showers, ramshackle stilted out-houses perched precariously over a water fall that doubles as the sewage outlet.

But luckily for us we had already freshened up on route with a dip at a fresh water cascade and plunge pool. Last thing to do was to call beer o’clock and savour the dinner. Tomorrows 40km of coca plantations and pantanal basin roads include a mix of uphill. Not bad considering today was 95% descent across 65km from a lofty 4700m. Some much needed shut eye was on the cards to the disappointment of the local kids. 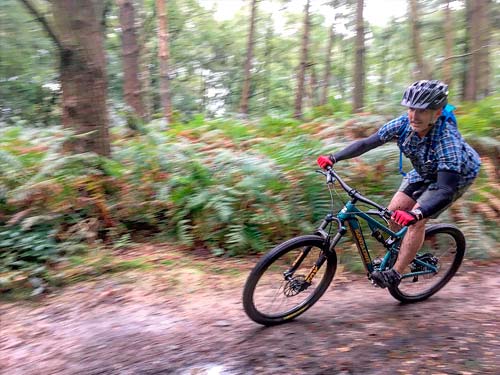 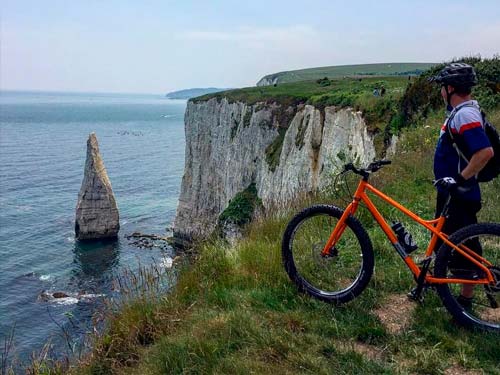 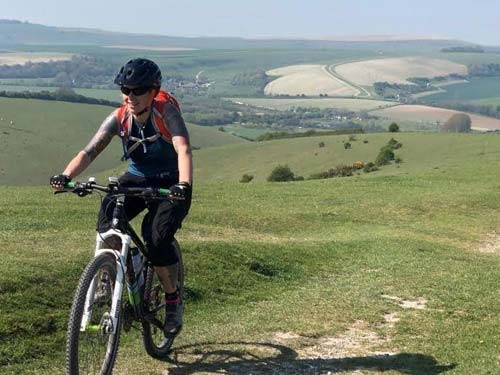 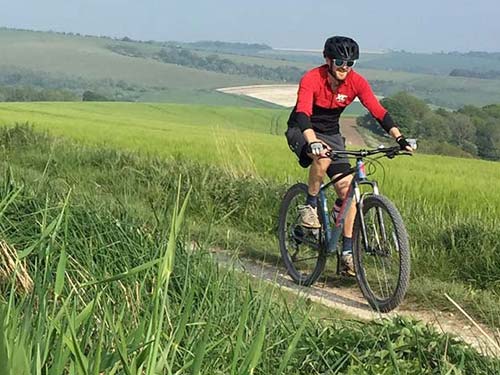 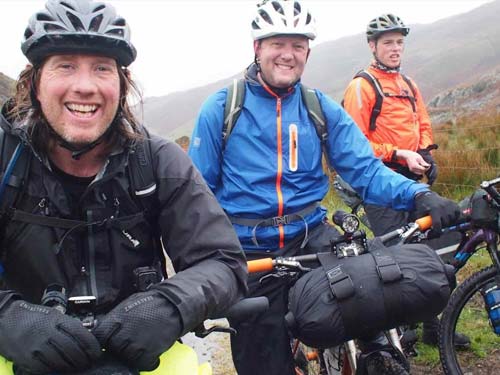 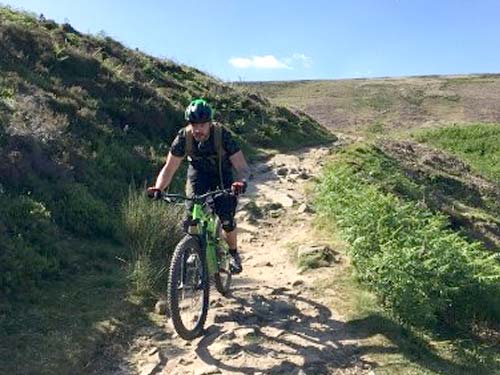 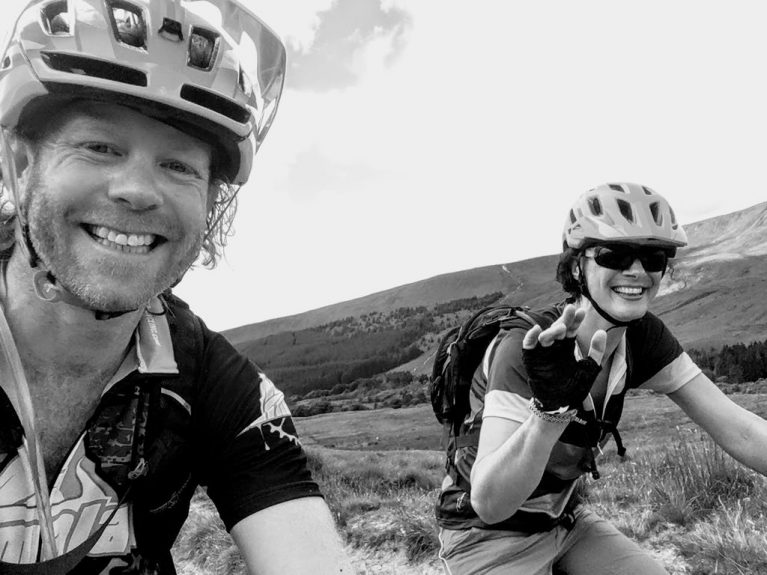 Join #TheMarmaladeMob to receive the latest news, updates and offers on our adventures 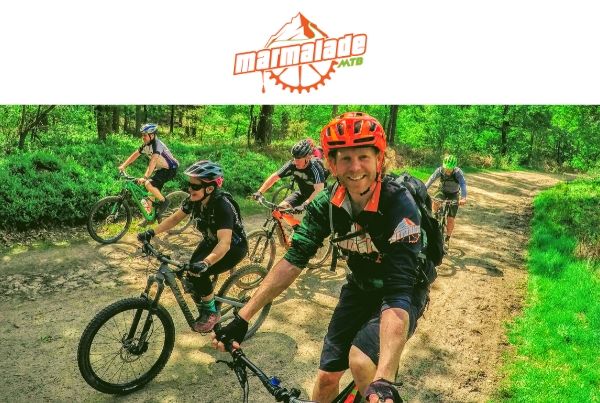